Twisted Savage Dragon Funnies is an anthology series edited by Michel Fiffe which originally appeared in single issues of Erik Larsen’s Savage Dragon. Now, TSDF resides in a trade paper back collection, and it spotlights the work of many excellent cartoonists doing their own Savage Dragon stories.

I’ve been meaning to write about this anthology for a while. Not that I have any ground breaking observations to add nor any comment of great length. I just really dug this project. So much so it will most likely pop up on my “Best Of” list at the years end. Because here’s the thing … Twisted Savage Dragon Funnies pulls off the impossible. Or better yet, the “dream.” This is a comic book work with idealism written all over it, and I’m happy to say I own a copy.

Because this project completely represents the type of comic I’ve wanted to read for years. I don’t know about you, but I used to spend much of my free time on comic book discussion forums. There was a heyday for such a thing, believe it or not. Some are still trying to keep it alive … Anyway, on such forums, threads pertaining to armchair quarterbacking would pop up frequently, and the simple question usually asked would be: what would you like to see more of at Marvel and DC? Or it might have been something like: what would you change about Marvel and DC?

Anthologies were my usual answer.

Because here’s the thing … while they tend to suck 9 times out of 10 (except for the possible awesome underground comics ones I haven’t read) … I love the anthology concept. There’s potential and room to run in an anthology. Multiple stories. A mixture of creative talent. No needed editorial barrier. An anthology can just be about good comics, and the necessity of shorter stories can only make them more kinetic.

But my reaction didn’t even really pertain to the anthology format as much as it did the idea of variety in stories. Because that’s the key to my enjoyment and the constant “rooting for” attitude I have for anthologies. They’re a fun tool to break the formula chain we’re so used to in mainstream comics. 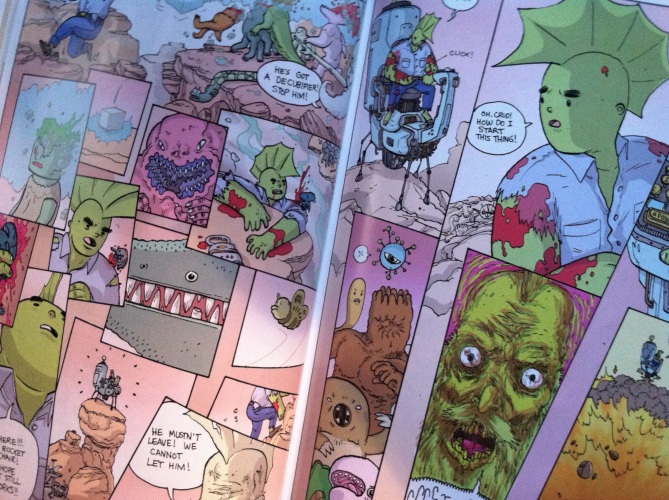 So my ideal thought’s always been: put a group of great creators on a Marvel or DC anthology and let them go absolutely nuts with the properties. Basically make the anthology a backdoor or think of it as a small “What if.” What if the entire Marvel or DC line was spontaneous and ever changing? Just every fanboys’ favorite character taken over by a set of wild creative minds and put through stories designed specifically to fit the creators’ will.

The anthology would kind of bring that idea to life.

And those projects did happen with the advent of Wednesday Comics and Strange Tales, except neither of those soared past mediocrity. Wednesday Comics gets its cred for the experimental packaging and both series delivered a few enjoyable works, but for the most part both projects suffered the usual anthology gripe by not delivering in every single story. Or, more plainly, they supplied more bad than good.

Twisted Savage Dragon Funnies picks up where those projects left off by obviously carrying over a similar approach, but TSDF does it a little differently when you consider the project’s serialization in Savage Dragon. Whether intentional or not, I feel the literal proximity of TFSD to Savage Dragon comments on the larger idea at hand, which is what I mention above – taking the established and handing it off to someone else for an extreme makeover.

The proximity, or actually having both works share the same staples as a comic book, works as a before and after. Or kind of a reminder. Like, look … here’s what Savage Dragon by Erik Larsen is and here’s what an underground artist free of constraint might do with it. It’s that juxtaposition of styles and choices in storytelling, as well as the clarity of it via the format, that brings home what I think the overall idea of Twisted Savage Dragon Funnies is. That no two artists tell the same story. Because contained within this project are only Savage Dragon stories and none of them come off as repetitive.

The artists involved do all they can to make Erik Larsen’s baby their own. There’s respect in the storytelling, but there’s also no sense of worry. The creators brought in understand what they’re there to do, and that’s to create whatever comics they want. No holds bar. In fact, I’d say artist Zack Soto’s story “Screamin’ Bones” echoes such a sentiment. The entire story is basically a dream sequence in which Dragon experiences all sorts of crazy and then dies. It’s the dream aspect in Soto’s story which allows the character to go through such extremes, but really what I feel the story is saying is “comics can go anywhere. why not go there?”. A certain panel at the end of the story pretty much boils that idea down to one, visual instance as Dragon drunkenly stumbles through a door marked “Do Not Enter.” After which, he falls into a pit of fire, dies and then wakes up, back where Soto’s story began. The reader gains the sensation that, “hey, none of that really happened.” But it did because it’s clearly printed on the page and you can easily see so by flipping back. Both instances of “happening” and “not happening” can exist in the same moment if you chose to view two separate pages at once. Or you could just take the reveal as a comment on how easily you can make the impossible happen in comics. Similar to Morrison’s Animal Man, when Buddy’s family just comes back to life. Because it’s fiction, and you can do that in fiction. Just how Soto kills Dragon then doesn’t.

And, hey, the story even references Memento. I’m cool with that. 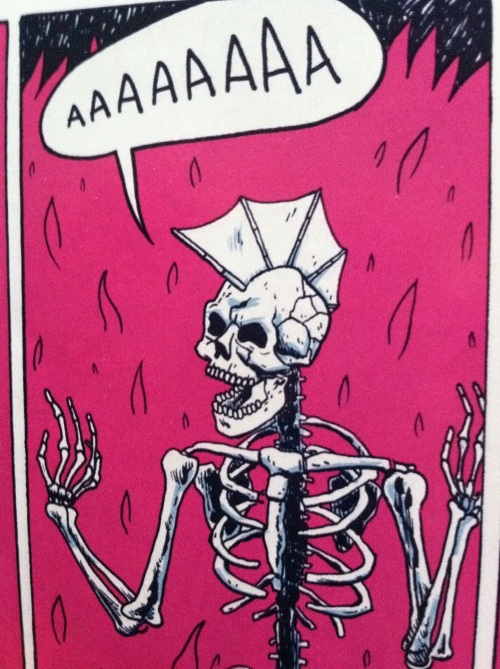 What makes Twisted Savage Dragon Funnies hit even harder for me, though, is its embodiment of unity.

There’s a rift between super hero comics and underground comics. I don’t need to tell you that; the internet will clearly do so. If you haven’t, you should read Michel Fiffe’s (the editor of this fine project) blog piece titled “The Big Fusion.” I’d say it’s a pretty clear companion piece to this here collection of comics.  In it, Fiffe discusses the always interesting mash up of indie cartoonists and corporate comics, and says in the piece that these instances are usually the best celebrations of the medium. To Fiffe, these mash ups are, as he puts it, “the real TEAM COMICS.” As in, it’s the rare situation in which everything comes together.

Well, I think Fiffe threw his own party when he set out to do TSDF because that’s what this is. Savage Dragon may not be corporate, but the book via its tone represents all things super hero comics. It’s the quintessential super hero book, and it portrays the genre in the classic way you’d envision. Fiffe brought the best of the best in terms of today’s underground market to this quintessential super book, and we the readers got to enjoy this excellent work.

Twisted Savage Dragon Funnies exemplifies what comics are. The book spotlights all the different elements present in this medium and industry. It represents all sides while exploring the notion of limitless boundaries. And while numerous artists are involved, I think Fiffe as an editor really conveys the strongest voice. Via his blog post Big Fusion, I get the sense Fiffe is a fan of the super hero/underground mash up, and with TSDF the guy gets to guide one of his own and champion the concept.

The book is really a love letter to all comics. And as an anthology, TSDF delivers in each and every installment. Yes, some hit harder than others, but all of them offer something. The book also stands as a great sampler for indie cartoonists. As someone trying to learn, I’ve gained much from this book.

I took the opportunity and used this year’s New York Comic Con as a means to conduct a few interviews. This time around you’ll hear from Erik Larsen.

Larsen is a cartoonist, one of the original founders of Image Comics, and sole creator of the comic book series Savage Dragon.

Larsen still produces Savage Dragon. You could even say the title has entered a new revival period as its creator takes the book and its cast into new directions while remaining on a tight schedule.

Erik was also announced as the artist of the upcoming Supreme relaunch from Extreme Studios … illustrating Alan Moore’s final Supreme script and picking up where the writer left off so long ago.

In the interview, we discuss his work on Savage Dragon as well as cover the basics of the Supreme announcement.