Godzilla in Hell by James Stokoe 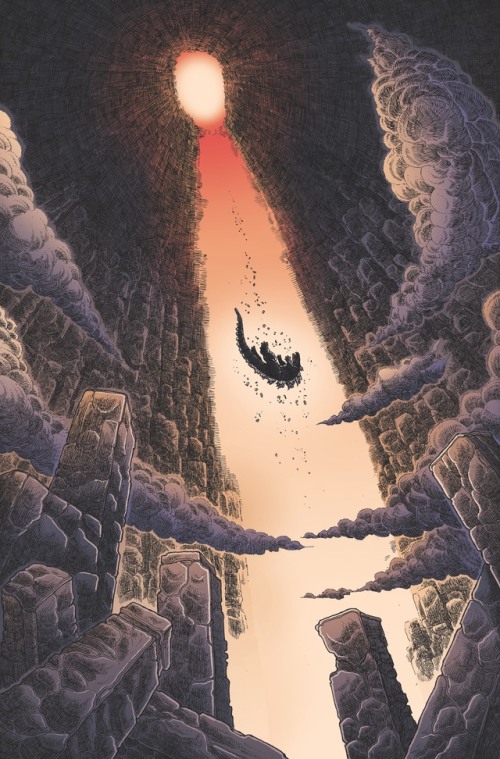 Godzilla in Hell surrounds the character with threats his height (or taller), undercutting his advantage of size. This evens the playing field for the fights James Stokoe stages throughout the comic. More importantly, though, it shows the audience a Godzilla that is at their level who must fight his way across a landscape anchored by various obstacles. These obstacles represent possible demons plaguing Godzilla (his nuclear origin, the people he’s killed, himself), and they trigger emotional responses from a character that’s typically shown as an unstoppable force, confident of his chosen direction.

The final battle, in numerous instances, features Godzilla being thrown around like a chew toy at the whim of an attacker. Stokoe draws the character’s body from low angles in this sequence and focuses more on the whole mass of Godzilla together, in the air, spinning out of control. He elevates this idea by composing the scene through a series of smaller panels that constrict the character. Godzilla’s true size is never far from the audience’s mind, though, because of a prior scene, in which a storm cloud of human beings nearly wipes him away. The cloud itself is huge, but Stokoe shows the tiny grains of its make up, which lends perspective. So when Godzilla breaks loose of the creature in the final battle and smashes him, you think about the absurdity of a 500 foot beast body slamming another 500 foot beast from what’s likely a 3 mile fall, and you’re at once aware of the mega-status of these characters, as well as their shared territory with us.

The best moments are Stokoe’s brief pauses, where he breaks away from the action and provides us a quick shot of Godzilla’s foot or face reacting to the violence (either in surprise, pain or strain). He does this a few times, and they emphasize the severity of the conflict the character must face. It’s easy in a story like this to do spectacle and excite an audience with colorful images, but it’s an entirely different game to do that and characterize the spectacle with nods to the character’s internal process, even if momentarily. It says more, too, that these nods are close ups. They intimately lend an eye to the actual struggle of these battles, and some even show a physical tole. But Stokoe is smart to keep these leaps short as that’s how they are most interesting. As asides. The audience reads this comic book for the spectacle, mostly. The existential glimpses work as smaller pieces of a whole.

That said, Godzilla in Hell implies opportunity for a deeper reading, if you really wish to, but it’s identity as a battle comic is really enough because of the quieter visual touches Stokoe uses to elaborate Godzilla’s character. They’re proof of Stokoe’s thoughtfulness, even when drawing a Godzilla fight comic set in Hell. The brief, poetic nature of it, too, is all the more special. It reads with a certain pride, though one affected by reality. You can tell he’s thought about all this a long time.