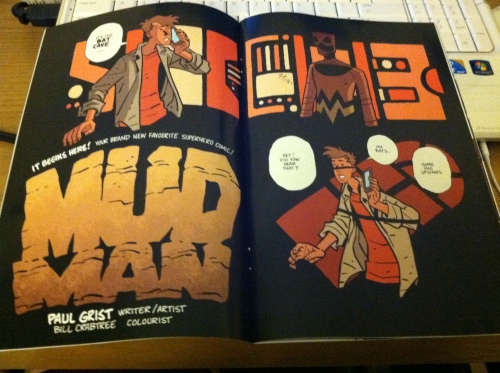 My clock reads 2:28 am, yet for some reason I’m awake typing this review. My head hurts, and my body’s shouting at me with cold chills and lonesome aches. I feel some sort of illness charging my way, which of course “just figures.” Holiday break begins this weekend.

I’m compelled to tell you about Mudman #1, though. That’s sad, right? That I feel driven to tell you, the invisible reader, about this comic book? And it’s not even that good, which makes this activity even sadder. I should just get on with it, huh?

What’s funny about this new Paul Grist Image comic is that the book doesn’t even deliver what it states it will, which is a “story written for the comic book.” By now, most of you internet savy funny book fiends probably know of the open letter on the inside front cover of this printed item. I believe “news” blogs picked it up and gave it a few rounds. But, in case you’re unaware, here’s the gist of it …

Grist’s entire letter tells the infamous tale of how our comics and TV shows are now offered in narrative chunks. You know, the box set and the trade paper back… and Grist isn’t down with this. For him, these media are a means of serialized storytelling, so why experience the entire story at once? He then goes on to pledge his comic, this Mudman, will uphold the serialized mindset. That’s great. I completely agree with him.

Because I like comics. I like 20 page bundles, and I like staples. I like monthly installments. I like the idea of time adding to the narrative. Trades, to me, destroy all of that, and in some regard, like Grist notes, trades destroy the flow of comic book storytelling. I honestly kind of hate the fucking things. To me, you’re not getting everything when you read the story in a trade because time is not necessary involved to help supplement the tale. Instead, it’s all in your face. You’re not thinking as much as you should about it. Most likely, when you’re done, the story isn’t going to linger with you. Because you’re done with it, and it just becomes another book on a shelf where you house the rest of your shitty Fear Itself tie-in trades.

Which is itself a messed up situation … the fact that everything must now see a collection. No. Most of this shit deserves to rot in some box or backroom storage area. But whatever. Mudman.

So I agree with the intention, but Grist doesn’t translate that intention. Instead, Mudman reads like any other first issue you might see in the current landscape, except it’s little weaker. Script wise. Art wise, though, I’d say it’s a whole other story. I’ll offer a little praise first. I don’t want to be a complete asshole. 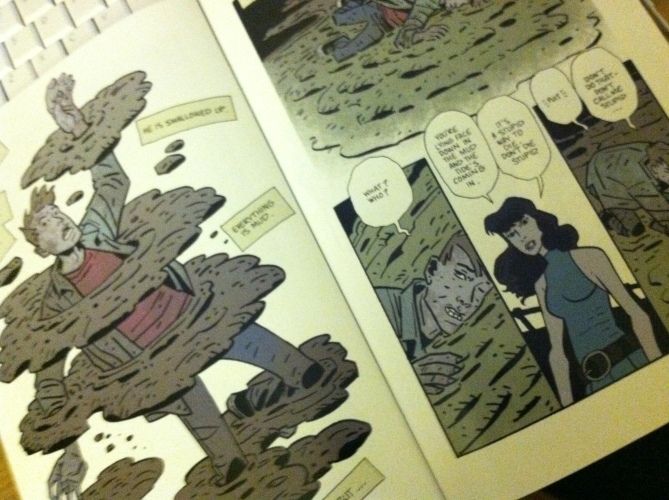 This comic looks like nothing else on the market right now. That’s safe to say. Style. Layouts. It’s pretty unique. What I appreciate the most is the abundance of white space left between the panels as well as in them. The book feels clean that way – clean and minty fresh. Which works very well when juxtaposed with the dark browns this mud-centric story implies. It also just bounces off of the majority of comics right now. So many of the big super hero titles resort to the muck coloring and “mature” stories in which Superman is a dick that this little comic suggests a breath of fresh air when you look at it. I can appreciate that just as I can appreciate the design aspect in each and every one of Grist’s pages. The panel placement suggests a sense of time invested in the creation, yet Grist’s expressionistic style offers up a quick cartooning look.

I think a lot of this comic, visually, is about emphasis. The book uses contrast to make specific elements stronger, and because of that I feel the comic keeps your eyes’ attention a little longer than most things.

But I was in ill-favor of this comic, wasn’t I? I should get back to that.

As Tim Callahan points out, intention is separate from what its actually on the page, and I agree with him, but I feel in this case intention is an element of the final product. For one, the intention is blatantly stated in the work, and two, the comic seems to be so much about offering an alternative that it cannot help but be connected to the statement of intention. I think Grist wants to do this comic because he wants to give people a monthly super hero story that is monthly as well as lighthearted, but he’s so much about that, that the comic really just seems to exist for the sake of an intention, or better yet, to be a public statement rather than to tell a story. So it’s with that I must hold the work up to the intention, and Grist doesn’t nail it.

The comic gets the lighthearted bit right, but it’s still written with an eventual trade paper back in mind. True, Grist has the notion of serialized narrative in mind, but this comic really leaves too much to be explained in future issues. There’s nothing here that’s solid or of its own. Instead, Mudman #1 sets up a lot of pieces without supplying anything concrete or satisfying for this monthly installment. The comic’s somewhat hypocritical.

But say we even remove intention from the argument and just focus on what is exactly on the page … Mudman still doesn’t really work. The plot is sown together in a disjointed fashion, going from numerous dream sequences to “real” world scenes. None of it flows together but rather makes you wonder what exactly is going on. There are even bits in the plot that don’t really work. For one example, our protagonist is at one point hit by a car – which is nonetheless driven by one of his teachers – but rather than being apologized to or taken care of, he is yelled at. That doesn’t make any sense.

The entire comic just makes for a disjointed read, and I was given very little in what is supposed to be a monthly installment to really say I received anything. That said, I’ll probably give issue 2 a shot because I’m still somewhat intrigued, but more importantly, Mudman looks really good. Can’t complain on that front.