Sorry. I couldn’t think of a title.

I bought and read three comics published by Image last week, and I wholeheartedly enjoyed each of them. 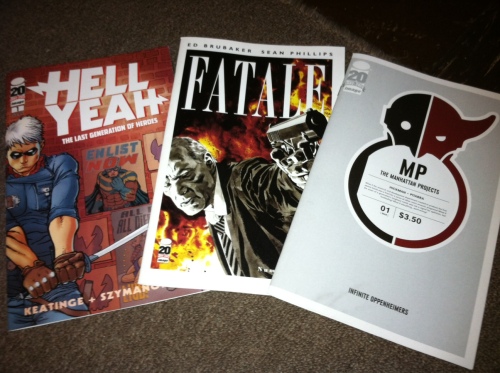 But aside from any craft or good time, something else about these comics struck me – the “newness.” Or, the energy.

Because see, alongside these comics, I also read two tried and true establishments.

And while they were OK, I left the reading experience unaffected and neutral.

So I began considering why and how the energy of the Image books hit me and caused a genuine excitement. They weren’t the best comics I’d ever read, but for some reason I walked away refreshed and hyped up about comics again. Why? And why had the Marvel and DC books left me indifferent all together. I think I’ve come to a conclusion. The difference is attitude.

Beyond technicalities and skill sets, attitude always screams loudest. That’s the personality of a work; the objective set of details is just makeup around the face. Being an artist, or making art … the goal is to communicate an emotion or make the work reflect the personality of the maker. It’s never really about filling a position or meeting a deadline. An artist works to make pieces that represent him or her in order to share oneself with the world. By that definition, attitude really becomes key to the success of the work.

With books like Hell, Yeah, Fatale and Manhattan Projects, there exist certain genre types and tropes familiar to other stories. These comics are new, and feel new, but in reality they’re made up of other things. Hell, Yeah works with the common knowledge of the super hero while Manhattan Projects takes elements of history and twists them for fictional use. Fatale blends two genres under a version of Brubaker and Phillips tinkering with their manner of storytelling. These books are composites. Not exactly New.

But they feel new, and that’s because the creators behind these books are approaching the production with spunk, shifting these collages of concepts into ballsy, confident comics that really, actually, represent the creators rather than carry their names in order to pay them.

But aside from the outside factors and creative origins, the books themselves embody that spirit. Brubaker and Phillips, rather than selling another one of their projects or doing some oddball off-shoot project (Incognito), seem to actually be messing around with how they tell one of their stories. Especially Brubaker, who’s script on this one offers up some interesting characteristics unfamiliar with most of his previous work – things like the point of view of his narrator or the construction of the plot. He’s made the story enticing by switching it up, and Fatale doesn’t exactly read like another Bru/Phillips collaboration. Hell, Yeah, just from subject matter, captures a younger, rebellious outlook, but I’d also say Keatinge’s script, with it’s quick cuts and particular voice, signals something confident. And Manhattan Projects … Nick Pitarra’s line work may heavily evoke Quitely, Darrow and Moebius , but I’d still claim the work possesses a forceful ability to grab attention. Hickman even seems to have something a little different under his belt. I mean, the comic still stars a a bunch of powerful men in charge, trying to save the world from itself, but the way he’s writing these characters appears a little more thought out than most of his recent attempts. Because, you know what, they’re actually fucking characters and not stand-ins for concepts.

The Marvel and DC books I read completely lack any reason, spark or care. They rely on the subject matter rather than attitude because the common readers of those comics are invested in the characters and familiar worlds they typically read. Attitude does not matter to them. They’re spending money to witness fictional occurrences.

Either way is fine, and either way can be entertaining, but from my experience it feels like attitude really is the correct way to go. I’d even say a creator, if in the position, should sacrifice technical efficiency and craft purely to convey a spirit or voice because, for what I want out of comics – artworks- it’s much more ideal for an artist or writer to generate an emotion via a work rather than tell a story, necessarily. Don’t get me wrong, I always want a sound story, but an emotional response to a work seems to invite a much more satisfying reading experience. Of course, though, the ideal route involves both.

The Image books do tell stories, though. They’re far from abstract. They’re genre comics. I found it refreshing to read a handful of genre books which exuberate such enthusiasm and primal response, though. Because, honestly, I walked away from those books hyped up and ready for more. That’s an emotional response I’ve forgotten to experience when reading my monthly comics – pure, childlike excitement. Which for genre comics, should always be the goal. The super hero market has sort of twisted that, though. The game is now more about continuing the soap opera than making the blood pump.

It may read cliche to type this, but the statement “creator owned comics offer exciting work because the creators are free to do as they please” works here. Between the last Marvel books I read by Hickman and Brubaker and these Image titles from the same writers, these Image titles clearly win out. These guys are making these comics because they want to not because they have a mortgage to pay. But, the statement “creator owned = better” isn’t always true. Sometimes the creator owned market can remain just as contrived and pointless as mass market comics. Oni Press knows what I’m talking about. Even other Image comics portray this (Thief of Thieves). And the stream can also flow the other way. Mass market super hero books can also channel an attitude and evoke an emotional connection. It’s possible. It’s been done. Read Uncanny X-force, for example.

So, what’s the point? Inspired work beats out soulless tradition every time, and while that point isn’t exactly new or profound, I feel a few of these new books in publication at Image exemplify the point in a nice, clean, current example, and I find the enthusiasm they’re bringing to genre books, the recent stepchild of the medium, engrossing as well as needed.

Of course, attitude, while I prefer it, can’t always be the ultimate decider of whether or not a work stands the test of quality. Some case of objectiveness has to enter the debate at some point to keep things in order. Otherwise, things tend to get a little too unpredictable as well as unmeasurable. But, maybe reading comics isn’t really about taking measurements or ranking books according to some universal rubric? Maybe the heart of the matter is simply about what you take away from what you read and the reaction you have?

To be clear though, my focus on attitude isn’t just some excuse for the quality of these comics so that I may praise them. This also isn’t some rallying cry or Team Comics fuckshit for creator-owned books. I just enjoyed what I read. Even without the aesthetic charge or surface buzz or the claim that they’re “trying something different,” I’d still cite these comics better than, not only Action Comics or Ultimate Spider-man, but most other monthly stuff I’ve read recently. These books are sound and well put together.

You be the judge, though. I know some people completely hated these new Image books, and I can respect that. But fuck it, I’m having fun.

I took the opportunity and used this year’s New York Comic Con as a means to conduct a few interviews. This time around, you’ll hear from Joe Keatinge, Ross Campbell and Andre Szymanowicz.

Keatinge is known as the editor of  Image Comics’ award-winning PopGun anthology, but this year he plans to engage the comics industry as a writer. His new creator-owned project Hell Yeah was announced at the convention this year, and Keatinge will also assume the duty of writer  on Extreme Studios’ relaunch of Glory.

Ross Campbell and Andre Szymanowicz are Keatinge’s collaborative partners for these projects. Campbell will draw Glory, and Szymanowicz will draw Hell Yeah.

In the interview, we discuss the bare bones of these announcements and joke around as the tangents flow.