The future, right? I’m not sure.

This week Bleeding Cool (as reliable as it may be) dropped word that one of my favorite comics, Savage Dragon, was going to now follow a day-and-date digital release plan through Comixology. 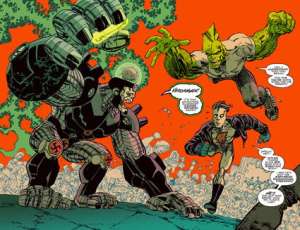 It is always at least interesting to see a comic book series go forth to test the day-and-date digital market. The decision is a step forward toward this “utopian” concept held by a majority of the online comics scene. The idea of new comics digitized the day they drop in print is the ideal model for most people, the model scribbled on almost all notepads describing peoples’ desires. The plan sounds so well on paper; comics can once again flourish. The ready availability and the scent of future make digital comics seem limitless and offer the chance to once again reclaim a large comics reading audience. Day-and-date only increases this with the excitement of new books every week, the ability to follow the form, and hell if the price can drop below the print price…digital is unstoppable.

So, Savage Dragon, or any book for that matter, adopting day-and-date brings the ideal a step closer. At least the ideal for most people. I’m not so sure if it’s my ideal, or that I really buy such a belief that digital comics will have such an effect. Why? Well, digital comics clearly already exist, and I’m not feeling much of an effect so far.

Granted, the numbers Comixology, or any digital comics distributor, may do are not available. The information on downloads is mostly unknown to the general online perspective, so for all I know maybe digital comic downloads are totally insane and comics are blossoming again in the mainstream. The publishers, Marvel and DC, do not seem to be giving off this impression though. For all it’s worth, I think they are both still trying to figure this digital thing out. If Comixology’s numbers were so high and so consistent and digital comics were strengthening the industry would it not be believable that Marvel and DC might speed up their push for digital, putting out more day-and-date digital releases rather than the random mini series here and there? I would think so, but they are not. Marvel and DC are still playing it safe with this digital thing, charging still high prices on digital editions in order to keep the print and local comic shop market intact.

Digital is an uncertain ground as of now even though it has existed prominently for about a year. Remember the iPad dropping and how the Marvel Application was at the attention of the media, even making a splash on the iTunes Store home page? That was plenty of attention for comic books, but if the digital numbers are not as strong as people hope after all that…well. Yeah, the selection was sketchy at the beginning you may argue, but the digital products available at that time were still comic books – comic books that most people probably had no knowledge of and would not know if they were good or bad until read. Drop the argument that day-and-date will change all, bringing people in, and I still have to question it. Again, people who are new to comics and know nothing of what is new or old will not be persuaded by day-and-date.  That is an incentive to the current readership. Even then though, day-and-date is only an incentive when the price of digital is cheaper than print which is not happening because digital numbers are not as strong as they need to be to persuade Marvel and DC to go that direction. See that, a cycle. In order for digital to become cheaper than print, digital must outperform the print market but how does that happen when the current readers buy print and no new audience comes to buy digital?

Maybe it will just take time for everything to grow and for digital comics, or comic books in general, to latch their teeth into a larger audience. That is always a possibility. My own personal opinion though says that the problem is not availability or price or day-and-date but interest. I do not believe the interest in comic books, or really reading as a leisure, exists with many people today. Too many alternatives to reading exist, and for most these alternatives carry much more of a flash and sex appeal than text on a white page or a book filled with illustrations. Reality TV, Xbox, drugs, alcohol, sports, the internet…those are America’s past times in the 21st century; reading carries more of a hard work connotation. The use of books and idea of concentrating on words runs along with the thoughts of school work, lectures and other dull activities. People do not want that. Not saying reading will die away – reading will always have a place in the world – , but I can see reading for leisure becoming more of a counter-culture activity rather than a tradition practiced by most. And that is just reading in general, not even comics. With comic books I think the problem is even a bit bigger. It is still lack of interest, but the lack of interest stems more from I think the general perception people have of comics. The medium is not seen as something artful or sexy but more as something surrounded by the odd interests held by the geek and nerd culture: Comic-Con, cosplay, the Hulk vs. Superman argument. That reputation holds a strong connotation that I feel most look at negatively.

So if the problem is interest, how does digital fix that? I do not believe it does, unless digital suddenly makes comics attractive and not nerd fodder. I’m not saying suddenly try to make comics “cool” by ditching our geek attitudes and such. I actually feel like that counter-culture identity is a part of the grand aesthetic that makes comic books what they are. Maybe we should just go with that? The idea of comics culture being this small, intimate understanding – why not use that to the advantage? Instead of worrying so much about digital and making comics widely available, why not keep them kind of obscure and in print? As the world goes to pixels, would a print comic book not stand out and automatically attract interest?  Instead of conforming and following the digital media revolution why not stand aside and have comics follow their own path? Instead of catering to an invisible, potential audience why not quit worrying, make good comics and party with the community already present?

I just think it’s kind of fucking stupid to be so worried about digitizing comic books when they are already their own cool, unique thing in print. Sure, the numbers are drifting downward as sales slump, but it’s a bad economy to use the typical excuse. That doesn’t mean print suddenly sucks and we need digital. It just means people are broke at the moment, not being able to buy print or digital comic books. People will come back though, and those interested by the uniqueness of print comic books will catch the bug and start reading. The new generation audience will come. Comics will continue. Let’s just stop trying so hard to keep them going and instead enjoy the party.

But, hey, Savage Dragon is digital, which is cool I guess. Another alternative, which is what digital should be at the end of the day. An alternative, not the only option. I do like my Dragon in print, you know. It’s cool that way.