Like everybody else, I too am reading Prophet and find it to be quite an exceptional example of what mainstream comics can do and be. Unlike the mass of creator-owned or faux-indie books that jump out and scream their separation from Marvel and DC, Graham and company wish to join up with the mass culture and beat it at its own game. A noble effort, and while the “play the system from the inside” routine usually grows old and results in little outcome, the Prophet crew seem be to A-OK as of now, playing the cards they have and letting the bait be taken. And it’s being taken. By you and me and the the mix of general readers and Comics Journal crowd who nod their heads and note this Prophet comic as a decent, pleasant item to receive each month.

In some sense, Prophet feels more like a gift, digging up some of that initial excitement we all felt at the start of our great comic book binge, rather than adding to the same old sludge of new releases we, for some sad, pathetic reason, feel the need to study. The creators have brought back that enthusiasm we all once put toward genre comics, and they’re making the month long wait mean something again. That’s so important for comic books. Especially now when it seems all genuine love, lust, fun or concern, theory and debate happens off the page and in some movie theater somewhere  or through some industry Op/Ed. Comics has reached a point where the comic books almost don’t even matter, and I for one find that a little scary. But Prophet’s battling back against that, leaving all the magic and thought among those panels to make its speech mean a little something more. That speech … it says, “look, yo, remember these trashy things? yeah, we don’t have to give up on them.”

And to be clear, I don’t mean to say Prophet is alone in this effort or that Graham is really the first guy to consider this mission, but rather Prophet stands out. Through its various, almost now trademark tools of storytelling, this book has shown in a matter of seven issues that more can be done. And by more, that would mean the mainstream genre comic, where it seems now little substance, energy or thought resides: the creators have split; the bloggers and pundits have spit their contempt; and I, who for  months watched the rest of the Comics Internet burn its bridge and squash any hope of good mainstream books, have finally brushed off my own excuses and now see at least the corporate side of comics as the cold, fake void it really is.

Maybe it’s a good thing. Maybe now we’ll all be able to move on and challenge ourselves with something a little greater and complex as well as expand our own horizons on what exactly comics can be. Maybe the only thing stopping us all along was our allegiance to childish fantasies and their lowbrow construction. Maybe we needed to ditch this shit all along in order to push our medium forward.

But there is this push from certain creators to keep the thrill and octane alive: guys who say fuck legitimization for favor of poop jokes and violence. Though it’s also these guys, like a Marra, Ryan or DeForge, who while diving into the trash bring forth a careful and considered sense of craft, and it seems Graham wants to join the effort with Prophet and mix and match the adventure and cliffhangers of mainstream pop comics with the sense of craft, function and theme better comics are capable of.

So far, the approach seems to be working. 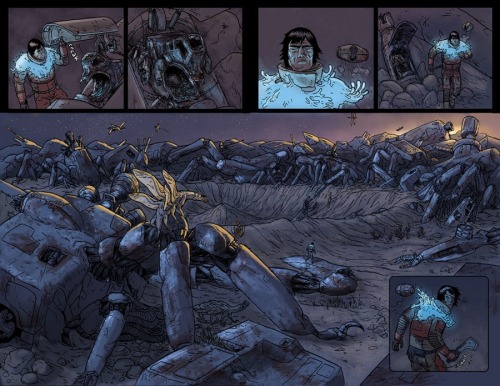 The most distinct quality of Prophet is its sense of atmosphere and place and how subtlety, versus blunt interaction, can build such a grand thing. This comic lives and breath “show don’t tell,” and while Graham’s stoic narration does play a large part of the series’ development  and tone, he really seems to embody his spirit as an artist here more than a writer, even though he doesn’t draw much of the comic, at all.  As the writer though, Graham lets his artists and the pictures they produce tell the story because he understands when to let his prose interject. Like a good comics writer, his bursts of narration come at the opportune time when a scene could use an extra push, and if he does describe or detail it’s always to compliment the visuals or catch something they cannot. But besides just knowing how to contribute to the book, the approach makes a lot of sense for what Prophet is: a visually intricate science fiction series. Why tell when Simon Roy can simply show you?

Prophet becomes a highly collaborative work that way, again, offering up some courteous advice to the rest of the comics mainstream. Graham works with his artists, and they in turn output something far more exciting, turning the book into more of a whole than a writer simply having a hired hand draw his words. A confidence exudes from this, as well, and rather than you, the reader, questioning the value of the book, you just kind of know this is good and roll with it. The confidence, though, does just really come from the subtlety of the work as Graham and Company trust the story gets across what it needs to without having to feed it to you via spoon.

We’re at a point with the book where visual styles are becoming characters themselves. Graham breaks his sub-plots up by artist assignment: Roy draws the initial John Prophet clone, Milogiannis presents Old Man Prophet, or the original, Dalrymple to John Prophet with a tail and Graham does the robots we see in issue twenty-six. All of these characters are established in Prophet’s initial story arc – or what makes up the first trade paperback – and it seems safe to assume these characters will be the major players of the plot Graham intends to spin. In one fashion, this works to separate a group of clones in order to make them decipherable to the reader, but the choice also suggests a pure attention to the visual presentation and what each individual artist can bring to the work.

That’s something a majority of mainstream comics have forgotten how to do as most of the industry still rides the wave of writer-driven series. The Prophet crew are transitioning away from that, creating this new set of cues for a reader to read by when they visit the book each and every month. Depending on the artist, a reader can take a guess at what plot point any specific issue may center around, and if it’s a new artist on the issue, well, you’re in for a surprise.

The whole thing brings the visual component of comic books back into the fold – especially for the genre driven side of the industry. That’s refreshing but also intelligent because it takes the reading experience of a comic book up from common slum activity to more of an area where your brain is involved with the process. You have to think about those visuals, for once, and ponder how they connect and contribute. Granted, it’s not exceptionally brilliant or worthy of intellectual study, necessary, but that much of a push in mainstream genre comics means a great deal. Take a look at most of them now; many are astoundingly dumb and easy to read. There’s no challenge or even involvement whatsoever. Prophet’s going back against that.

And while visually involved, Prophet does present some thematic elements of interest, whether its the boundaries of human potential or imperial conquest, this science fiction comic does seem to have a core group of ideas its commenting upon. And the level of imagination is off the charts. This thing didn’t stop at “what if humans were the enemy and not the zombies?”.

Where Prophet stands in ten years, who knows. It may not even rank at the end of this decade, but for now it feels significant, and if anything, it’s pushing mainstream comics into a more respectable territory. I’m in favor of that, because while I can get down with art comics, I do want a sense of bombast and fun in this stuff. That’s an essential aspect of the medium, I feel, and if we forget that we will lose something. Creators just need to work to hold this stuff up to a higher standard. Just because it’s adventure, doesn’t mean it’s stupid.