I walked away from this one disappointed. No matter this issue’s place as a penultimate chapter, Bendis and Maleev feel it’s more important to make Moon Knight #11 a perfect example of what some complain about super hero comics for. The issue involves a lot of fighting with little point, and it drags out such a thing way past its due because supposedly we’ll enjoy another fight sequence in a comic book. Sure, Moon Knight, under Bendis’ pen, has kept a hand between itself and obligatory action scenes for most of it’s run, but all this newly added violence, rather than act as an appropriate crescendo to a build, stems from a character who’s role resembles a cheap cameo. As I wrote last issue, Madame Masque seemed to appear to act as bridge between this Bendis project and another, and Moon Knight #11 only confirms those previous suspicions. The inclusion of her character really hasn’t lead to anything but an off-putting aside in what was a consistent series, and man, with one issue left, what poor timing to go off on a tangent.

– Echo’s ghostly appearance toward the end makes for a nice scene, and it manages to bring a few things full circle. Granted, it’s a total rip off of Obi Wan in A New Hope, but the bit plunges right down to a key piece of Marc Spector’s character and bluntly calls attention to it.

Sums up a lot about a guy who spends more time in his head than anywhere else, and as sad as it may be, the moment emphasizes a relatable theme for the reader. Although the message comes from within, the part Marc’s trying escape, the message isn’t diluted or misplaced. Instead, Echo’s spirit is now a new, little voice inside of him, and and it allows Marc to tell himself to kick his own ass into gear. No better help than self-help, right?

– This one, small panel of Ultron is cool. 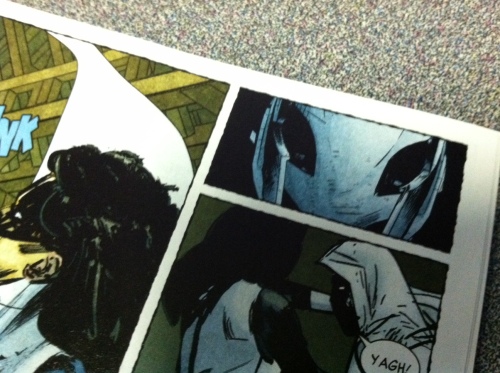 The panel provides a menacing flair even though it’s randomly spliced into the page. Dead hollow eyes  cut into a cold, chrome object, and it feels as if this brawl is under the eyes of something larger.  But, aside from tone, the panel reminds the reader why exactly these characters are fighting, making a nice attempt by Maleev to make this entire fight sequence feel like it may have a reason.

– Too bad that reason’s overshadowed because while the fighting between Moon Knight and Madame Masque revolves around a plot point present since issue one, one of the character’s involved hasn’t been around that long, and her spontaneous appearance hasn’t exactly sported a very good cause. Basing what should be a thrilling struggle on the involvement of a character with little development was a bad move, leaving the entire fight sequence uninspired rather than thrilling. Much of the issue reads like page filler, and it perfectly captures the groan and hiss angry comic readers release when they complain these books contain too many fights. “It’s apart of the genre,” usually encapsulates my typical excuse, but here I only felt the groan most people utter.  Masque may be a fine character in her own right, but here she serves little purpose other than Big Bad’s daughter, and when Big Bad appears to already be back in the game by this issue’s finale, you start to wonder … why transition to Masque at all? What was the point? To show a father/daughter relationship? To show Moon Knight’s apart of some larger, fictional world? You thought it’d be fun? I don’t know. I don’t know other than what I’ve already written – that it connects one Bendis book to another. Which is fine, but this is a poor connection which, ultimately, only drug out this series another issue.

– What’s worse is that the fight’s not even drawn that well. Maleev’s artwork isn’t awful, but something about his contribution in this issue feels off. I’ve enjoyed his work on this series thus far, but issue 11 features a Maleev prone to stiffness and awkward placements of both characters and objects.

This doesn’t work when more than half your issue involves people punching each other. If anything, the artwork only emphasizes what’s wrong with the comic because stiff and poorly composed are about all that describe it.

Weak issue. Not the way to lead into your finale, and right now I’m only hoping Bendis can wrap this up to some degree (although, history says he won’t). When people complain about Bendis for drawn out plots, I usually roll my eyes a bit, but this example has me in agreement- a poor representation of this series and both men’s work.