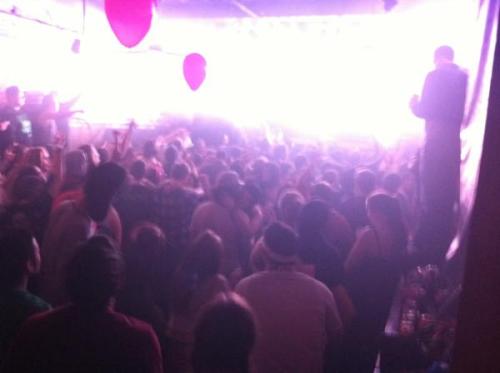 This was how my weekend started.

AXE – that terrible body spray that supposedly gets you laid – drove into town and set up shop for one of those “One Night Only” concerts, and Girl Talk, the music mash-up extraordinaire, was listed to play.

Girl Talk’s one of those music favorites of the moment that I have mostly been ambivalent toward, but when AXE wanted to give my friends and I a bunch of free tickets and hold the show at a small venue like 123 Pleasant Street, I couldn’t deny. Why would you deny? A free show’s a free show, no matter who it is.

And it was fun. Between the toilet paper streamers, confetti, balloons, loud music and audience members storming the stage, Girl Talk and his crew knew how to throw a party. And that’s all that’s really needed at a show of this kind where, really, a DJ is the main act. Especially in a college town. One, big party can go a long way.

If anything, it was quite the event, and it felt good to attend something exclusive like that. Those tickets weren’t easy to come by, but I managed to get lucky as I sometimes do. As for why Girl Talk came to a town in West Virginia, well, he’s from Pittsburgh, which is only an hour drive from here. At the end of his set, the man grabbed the mic and pronounced that in his early days, before even his own home town showed him any love, it was here, in old Morgantown, West Virginia, that he found an audience.

That would explain it. 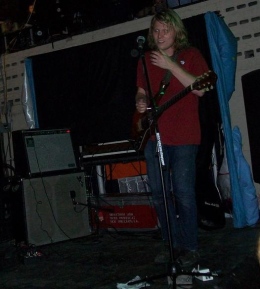 Speaking of shows, Ty Segall will make an appearance in Morgantown soon. The show will take place on January 14th at 123 Pleasant Street, and U92-FM, the college station I’m involved with, is presenting it.

There’s a little article here if you care to learn more.

Along with Segall, my friends John Casey and Jami Calandros’ band “Best Friends” will provide the opening entertainment.

I am excited for this show. It should kick off the Spring Semester right.

It’s odd to think of the comic book industry without a Brian Michael Bendis’ Avengers book in it, but I guess should get used to the thought. Whatever dirty finger you may point at this book, the run is a landmark, and even with its slumps and inconsistencies, I still would list it as one of the more interesting and probably influential super hero comics of the last twenty years. In some ways, I’m happy to see it end – less money I can invest in Marvel – but I’m also a tad sad. My entire time as a comics reader has been marked by the presence of Bendis and his Avengers, so, in some ways, this feels like the end of an era. And I think it will seem that way for many people. Maybe than rather ending the world, 2012 will instead bring rapid change. All signs are pointing toward such. Occupy to Bendis’ Avengers.

The man writes another comic though, and telling from this piece on CBR I think Bendis is quite passionate about Moon Knight. Good. I am too.

“This is exactly the kind of book no matter who’s writing or drawing it that needs a lot of support from people.”

He’s pretty open in those statements. Respect. If anything, the pleadyness of it tells me the guy wants this comic to keep going. He cares, and I don’t think it’s because it would mean less money.

Also noted, much of what Bendis says in that article I’ve said myself on this very blog. So, just saying, you should be reading my posts on the series. I’m tapped in.

Anthony Bourdain on WTF with Marc Maron. I really enjoyed this episode. The whole “rush and instant satisfaction” from working in a restaurant … I’ve been there.

The Mindless Ones blog recently posted an article titled “The Theatre of The Direct Market.” For anyone at all aligned in comics and considers themselves on the “in” of the industry or whatever we call it, I suggest you take a read. It’s very interesting, and it provides a look at the direct market that cites an actual influence on content rather than just business models. Read it slow. Let it sink in. Big words about.

Alright, I’m out. If you at all like or hate these “No Clever Title Needed” posts, give me your feedback in the comments. Please. I’m thinking of doing one of these a week as a manner to express quick thoughts and link cool shit. I normally would not worry about the audience’s feelings, but in this case, these posts are kind of entirely for the audience. I don’t write these for me, necessarily. I write them to share stuff with you as well as give you a bit of a peak into my actual life.

Filed under No Clever Titled Needed