The Success of Chew

Does this title sound familiar?

For anyone who has followed my previous online exploits, I am sure you may remember my previous attempt at discussing Chew. If not, do not worry. It was a mess. An essay  inspired by conspiracy theories and a need to mudrake, the original Chew essay was a prime example of an angry, ill-informed comics fan.  I was young (younger), and I had a beef against Chew. For some reason, possibly just plain old aversion, I could not agree with the majority opinion of the book. Everyone loved Chew, and I did not. I saw this as my opening, my chance to really grab some attention. I wished to strike a chord across the internet cosmos. I felt like my opinion had a lasting impact. I felt the need to grab the public by the throat and shake their foundations clean. I did not agree with Chew, and I needed to make this clear. I wrote my essay, and I made it loud. The blog post was made, the link was spread. My work was done. Soon, the internet would come calling my name, holding me up high as the next great personailty in comics whatever.

And, boy, did it get attention. Just not the kind I wanted. 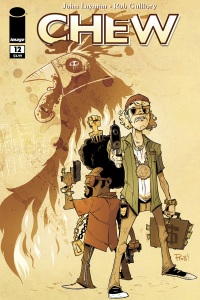 The Chew essay quickly became  a great example of what was wrong with the comics internet. A manifesto backed only by anger and loose facts, it was a piece that tried to delve into the behind-the-scenes aspects of the book’s success, citing its well-doing because of favoritism and hype. Really, this was not the case but instead my imagination and bias against the book – a bias only developed in order to derive attention. People ran with it, though. The link to my blog was spread and suddenly the comics internet knew me as the angry Chew hater. Even the series artist, Rob Guillory, read my essay and quickly delivered a response, correcting me of my errors and sharing the actual details of the story.

Simply said, in the matter of one afternoon, my perspective on myself and the comics internet experienced a radical…experience. It would take some time and some growing up to truly look back and learn from it, but the effect was certainly felt at the moment of publishing.

In hindsight, I see the errors of my way.

1.)     I should have never felt the need to write something only for the sake of attention .

2.)    I should have actually done the research.

3.)    And, finally, the only way to really judge a comic book is by looking at the work itself.

The third point is the most important, and probably how I should have approached Chew to begin with. The actual work is what matters.. That was the major mistake of my take on Chew, and now I feel it is time to return to the subject and properly explain why I believe Chew has connected with so many readers.

And, hey, don’t worry. I’ve done my reading, and this time I plan to stick strictly to the book itself. 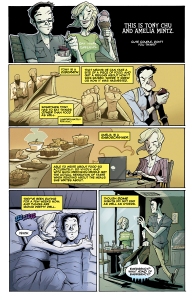 So, let’s break it down. Off the bat, Chew makes a nice first impression by use of its high concept and unique identity: guy eats food, food provides guy with information and the information either helps him solve a crime or seriously grosses him out. It’s a creative concept that builds the intial interest of the audience, as all concept pitches should. Chew is in an even better place, though, because its concept is so unique. The concept is certainly one not heard of before, and it carries a strong ability to make a potential reader stop and think.

All comic books need to carry that sense of identity. So many books are published , yet so many look the same. If you do not believe me, then you should just pick up a Previews Catalog. With this the environment, it is so easy for a book to get lost in the maelstrom and fail. Not Chew, though. This book has the strong sense of identity, and it easily sticks out in either Previews or on the shelf. The title, the concept, the art, the design…they all carry a unique quality, and they all work to gain interest, pulling readers in for a test drive.

The true success of the book becomes apparant upon reading, though. The high-concept certainly adds to the reading experience as it does in identity, but Chew also carries a quality of consistancy. The book is written in a style similar to a sitcom. If I may, the setup:

Take a normal, everyday idea – the show is about a family – yet mix it up with a very out of the ordinary beat – but the family lives on the moon.

Take a normal, everyday idea – Chew is about a cop named Tony Chu – yet mix it up with a very out of the ordinary beat – but Tony Chu is a cibopath.

It is very sitcom in its approach. Layman and Guillory establish this setup, and they simply hold onto it. With each issue they keep the concept at the core while mixing in a blance of humor, drama and underlying points. Each issue is a complete package holding a consistant tone, and you know what, I feel that is a very smart move. Commercially speaking.

The book provides a sense of dependable comfort to its audience. Every month readers know what to expect of Chew, and every month it delivers just that. Comic fans love this sort of thing. We, by our very nature, love to see the things we enjoy repeated. If we enjoy a specific take on Batman, well, that is the take we will most likely always want to see.

Even as human beings we seek consistancy in our daily lives. We enjoy the routine, and we enjoy the assurance of knowing what to expect. Chew, as well as television sitcoms, tap into that structurally. Now, yes, specfic events do vary in each issue of Chew. The story can offers twists and surprises, but I am speaking in terms of structure and tone. On that level, Chew is basically the same each issue. Going in,  a reader knows that Tony Chu will eat something disgusting, just as Applebee will yell, Amelia will warm Tony’s heart and and John will make us laugh. Those are the book’s components, and Layman and Guillory keep them turning. What Tony Chu eats may vary with each issue, yes,  but when you boil it down Tony still eats.

This consistancy is what hooks readers in and seeds their love for the series. It’s comfort food in comic book form. On a commercial level, that is a great quality to have. When something is comfortable for an audience, they are most likely to never let go. As stated, we love consistancy in our lives, and I feel that transfers right over to our entertainment. I have to respect Chew for that because the book does what most corporate forms of entertainment wish to. The book provides a nice experience that services an audience and brings them back with each installment. 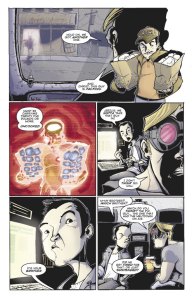 I do not want to down play Chew as the “comfort food” comic, though. I do like Chew. Upon a recent re-reading of the entire series, I found myself enjoying my time. Why had I not before? I feel my reason for previous dislike spawned from the habit of reading comics month-to-month. As described, Chew, at least to me, reads about the same each month. I tend to not enjoy books of that vain. I like comics that mix it up, or at least pack an energy in each issue. I was not getting that from Chew as I intially read it. Reading the series as the larger piece, though, the single issue does not need to be the focus. Suddenly, I could look past the usual beats and see the larger narrative. Suddenly, I could see what Chew was doing, and what it was about. Suddenly, I kind of liked Chew.

It certainly is still not at the top of my stack, but it is a good comic. Objectively, it is a well written, well oiled machine. Very formulaic, but masterful of the formula, Chew handles its specific elements with grace and confidence, and Layman, as the writer, does a nice job pacing his story in the long form. Each arc, always five issues in length, adds a little bit more to the overall story, and each arc creates a nice sense of building. The characters are progressing at a comfortable rate. The ideas of the book are fun and interesting. The artwork is great to look at.

Simply said, Chew is a good comic book, which is ultimately the most important reason for its success. Yeah, it doesn’t push the medium in anyway, but hey, not every comic can. Sometimes the industry needs those consistant pieces, those bits of comfort food. That’s Chew, and it does a nice job of it.

So whatever the “behind the scenes extras” are, Chew seems to be the Cinderella Story it is because of what it does right. Where other comics fail, Chew picks up the pieces and establishes an identity, a consistancy and just offers an enjoyable experience. True, the book is not my ideal example of a comic book, but I can still respect it and understand its success.